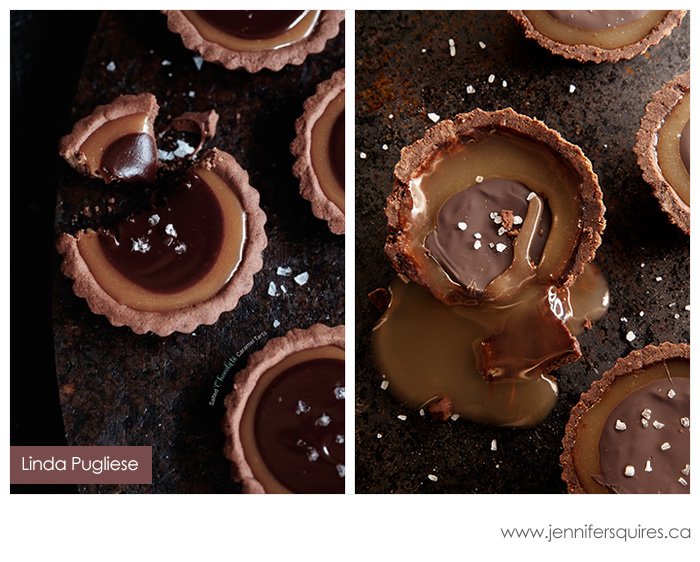 Hi everyone! Sorry I’m late! The past two days have been a mess of technical issues around here with software problems topping the list. I had the bulk of this post ready to go then other things took priority and here we are. But now I’m ready to share the results of my Pinterest Photo Project – and let me tell you, I learnt a lot. 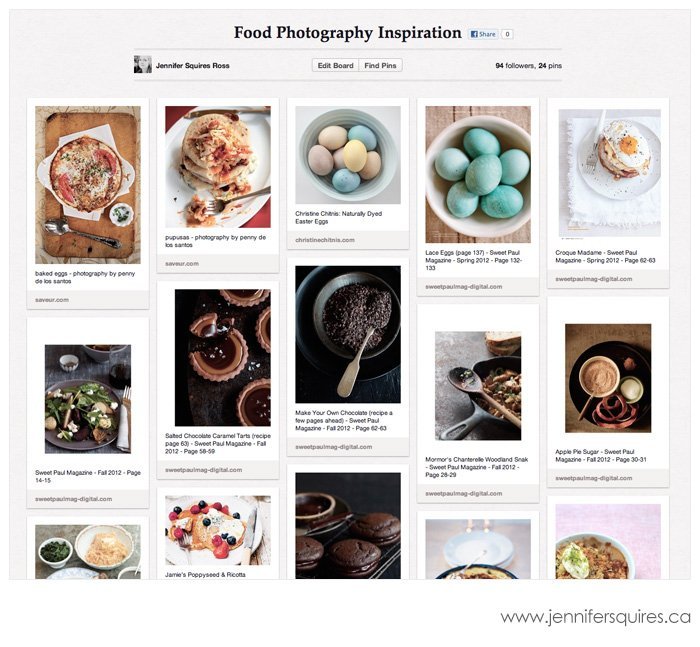 Looking through my Food Photography Inspiration pins I decided it was a good time to experiment more with photographing on a rich, dark background instead of my usual bright whites and the like. When I was in college one of our assignments was to find a photograph in a magazine and reproduce it. Ya, I know some people think it’s blatant copying but as long as I give credit where credit’s due and I’m not trying to sell it then I’m all for reproductions as a learning experience.

My image of choice was the Salted Chocolate Caramel Tarts from Sweet Paul Magazine (image on page 59 and recipe on page 63, in case you were wondering), with original photography by Linda Pugliese and Food Styling by Paul Lowe. It was a long, sticky process, and I made lots of mistakes along the way, and it re-affirmed to me that photographing fussy food really isn’t my thing. Real food is where my heart is, the messier the better. 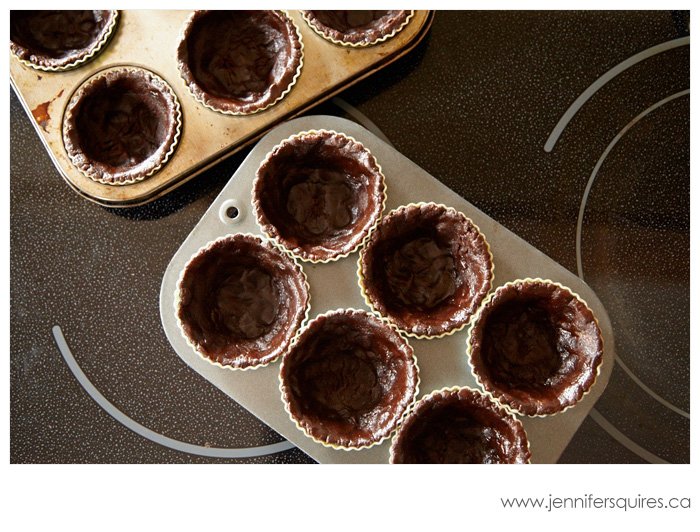 I started by making the tart shells which was when I realized that all may not be what it seemed. In unbaked form mine were quite a bit darker than the ones pictured. Hmmm… Interesting. And since I didn’t have tart pans I just used our muffin pans with silicone liners. Clearly I should have spent more time fussing with the outer edges so they looked all nicey-nice like in their image. I thought it might just work out and give me a corrugated effect once they were baked but that didn’t really happen.

Next I whipped up the caramel. I’ve made it a number of times before but it’s been a while because Darren  shouldn’t have eggs or dairy and I haven’t really thought about how to make it without. I cooked it as per the recipe but I guess I should have let it simmer longer since mine didn’t get nearly as golden as the stuff pictured. I poured it into my shells and got busy with the chocolate. 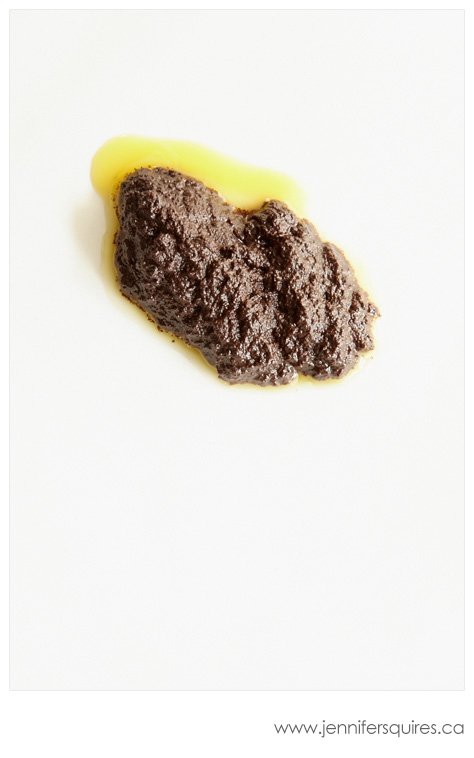 My chocolate seized. Or it started to anyways. It went all lumpy. I don’t know what happened, maybe I overcooked it or maybe some water splashed into it. So I pulled it off the double boiler, transferred it to a cool bowl, stuck it in the freezer for five minutes to cool down, added a bit more milk, and tried heating it again. Nadda. Nothing. Still a lumpy mess, and we don’t even need to talk about what it looks like… Since I’d used the last of my whipping cream I decided to just melt some dark chocolate and drizzle with that – bingo!

Now onto the photography… 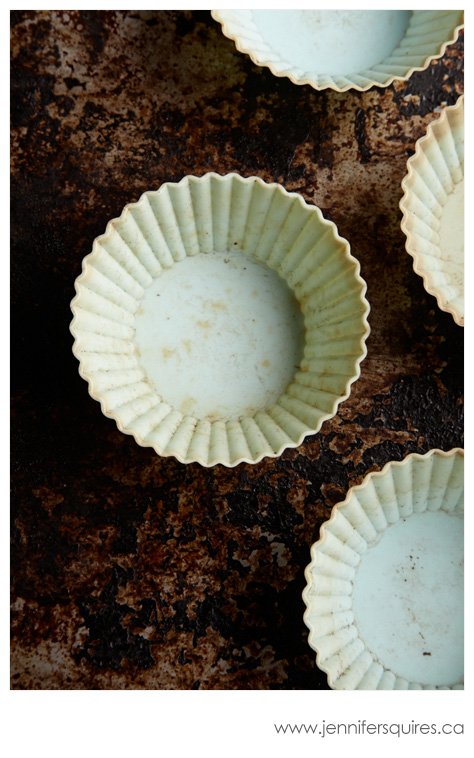 I used my empty silicone muffin cups and the composition tool in Capture One Pro 7 to line up the shot. I don’t get a chance to overlay my work with a layout very often and I’m always amazed at how awesome it works. I shot tethered, positioned my camera, and nudged the cups around until everything lined up. Fantastic. 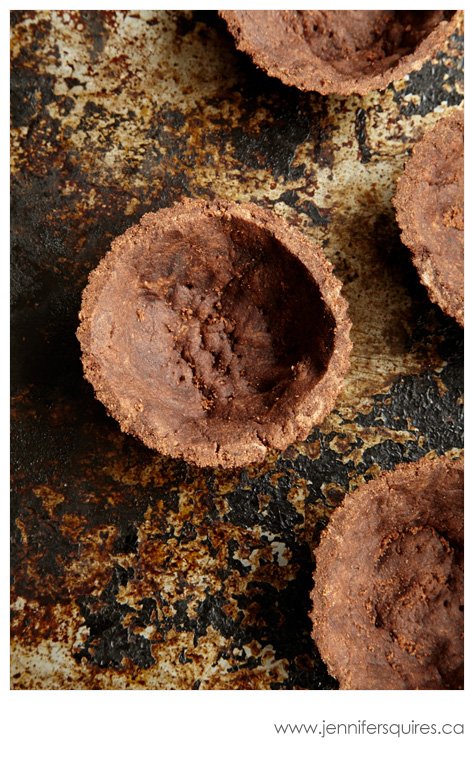 Next I swapped out the cups for the tart shells just to see how they’d look and to get them into position so I could fill them. Again, overlay = awesome! At this point I was able to start working the light a bit, lowering the shade on my main light (a nice big window) and adding in a black reflector to the left to help deepen the shadows. 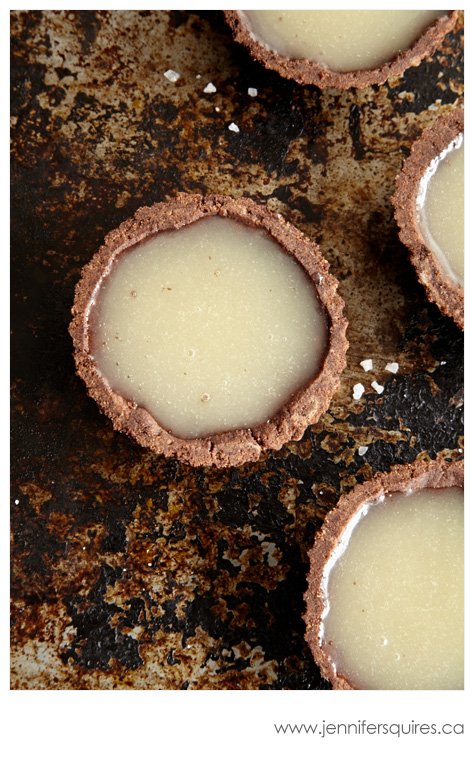 I spooned in the caramel and adjusted the lighting further to make the top of the filling look good, added a few grains of salt around the tarts, and drizzled on the melted chocolate.

Only a few minutes passed before my caramel lost what little lustre it had. Interesting. It took a bit of tweaking to make the chocolate look good, smoothing it over with a warm spoon, and touching up the edges with a metal skewer. I had to work fast too so everything was in place before it started to set. 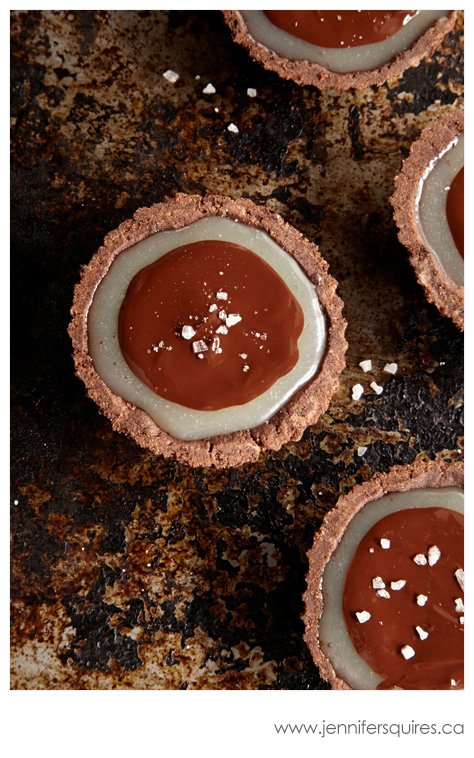 I added several grains of salt to the centre of the tarts and everything was looking as good as it could given the bumps I’d hit along the way. Then it was the moment of truth, cutting open those babies. 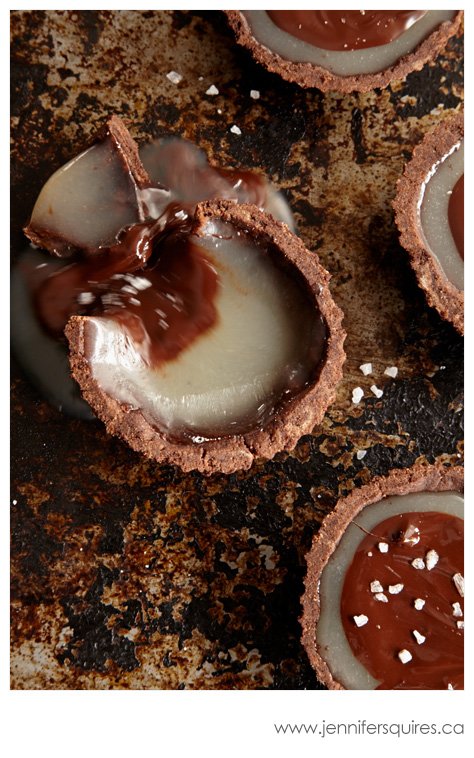 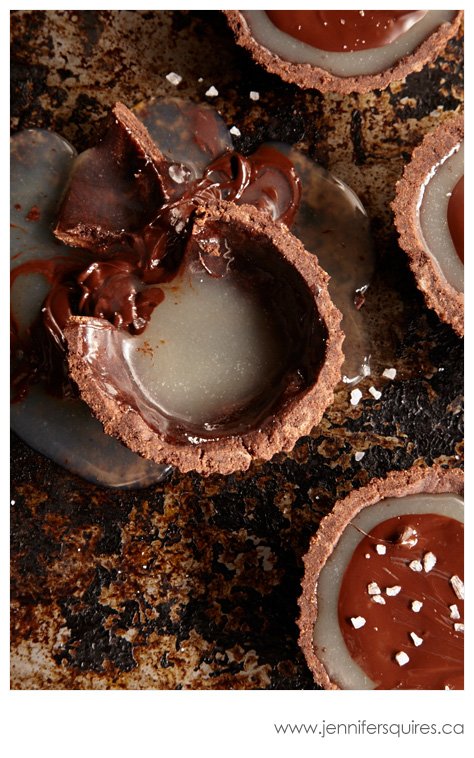 I guess I was excited. I wasn’t really thinking. I’ve photographed honey and other gooey things lots of times before but I failed to remember that these things need to set. I had carefully marked where the breaks were going to be and as soon as I started to cut, a caramelly tidal wave ensued and all I could do was stand back and photograph it. 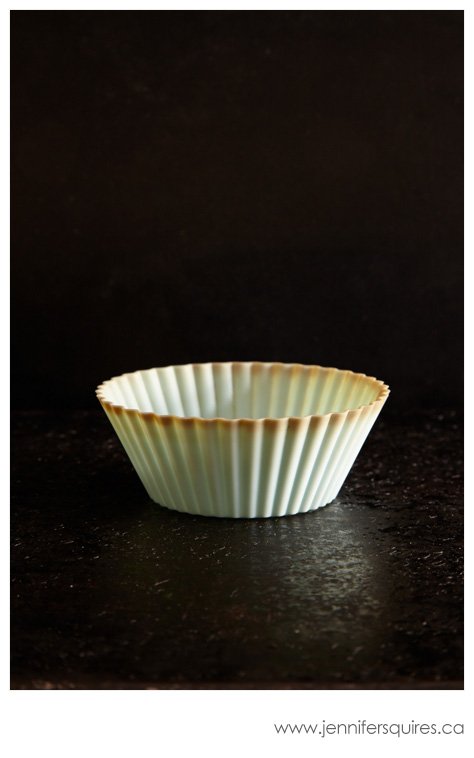 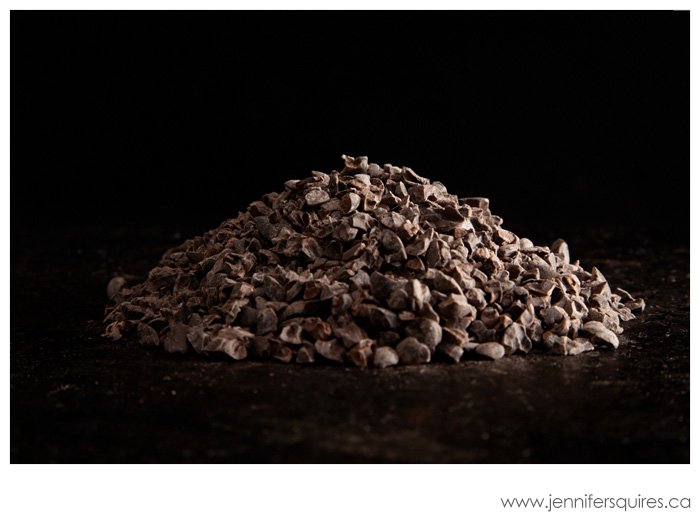 It was definitely time for a cup of tea and to rethink this whole process. I needed a brain break. So I played around with a silicone muffin liner and some cacao nibs on the dark background, while my spare tarts were in the fridge firming up. Unfortunately I had already drizzled my extras with chocolate so that would be firming up too, not exactly the look I was going for but definitely something to keep in mind next time. 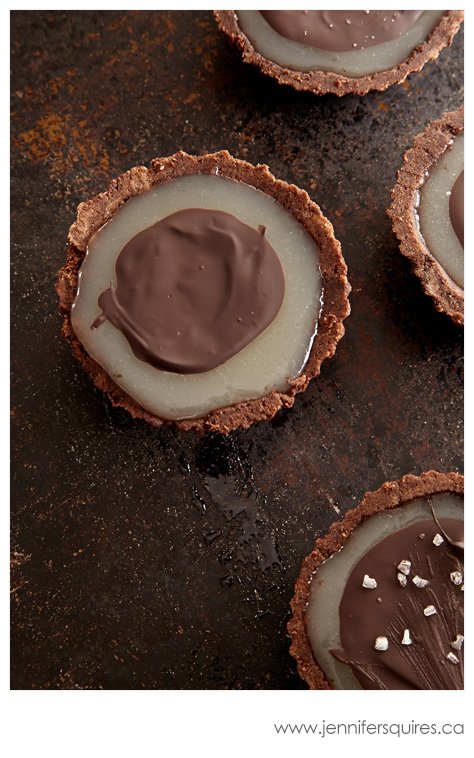 I got everything all lined up again, just like the first time. 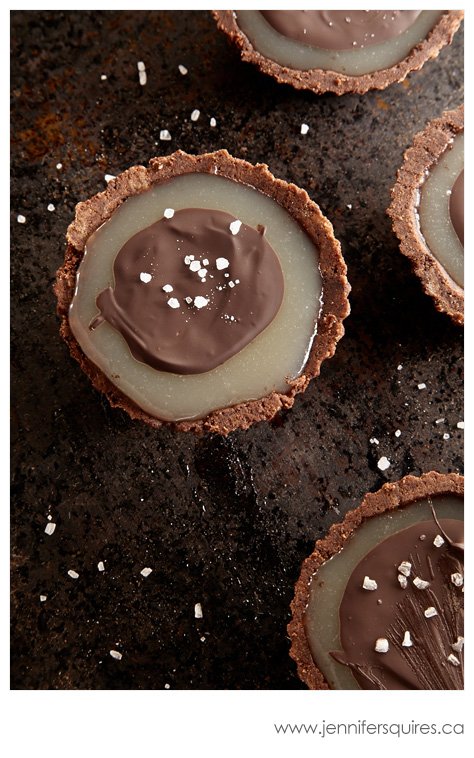 Sprinkled on the salt at the last. 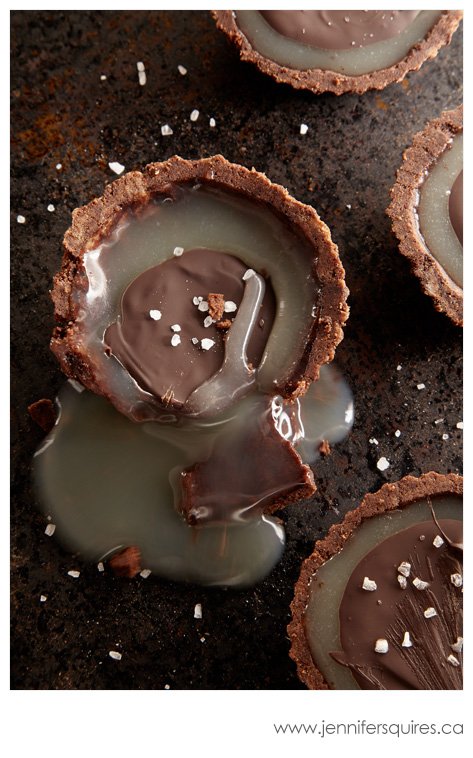 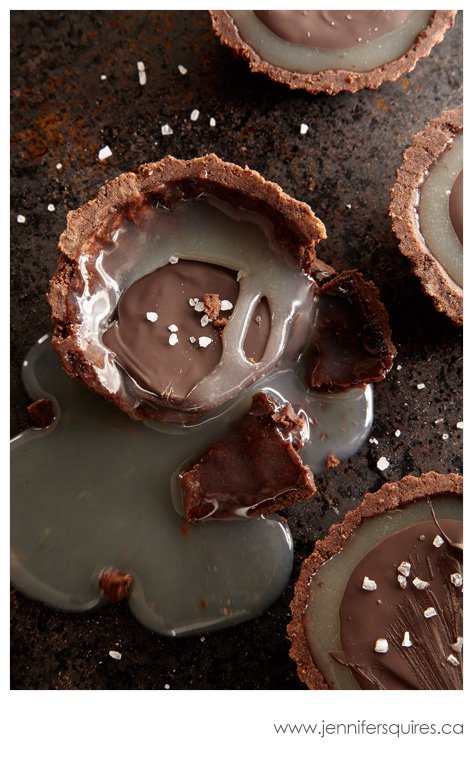 And I held my breath as I cut into it. This time I chose to cut the bottom edge. I figured there was a very good chance of another caramelly tidal wave and it would make the most visual sense if it flowed downward. And it did. 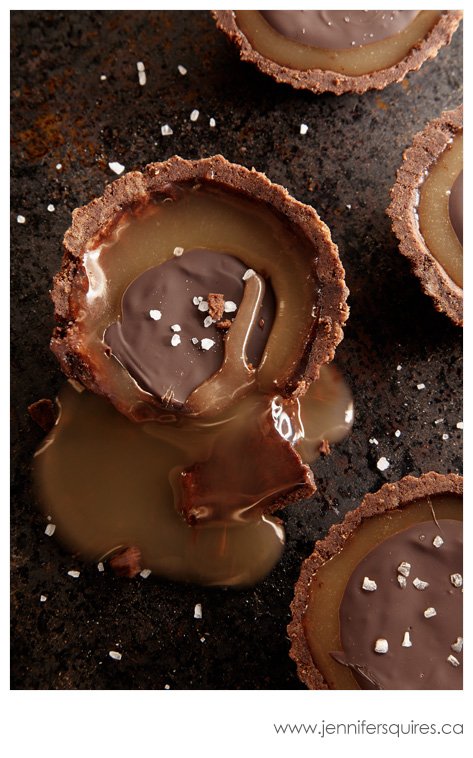 After a little bit of work in Photoshop here’s where we stand. I prefer to use Photoshop as a last resort, getting everything as right as rain in camera and making only the smallest of tweaks after, but with the way things went with this shoot it ended up being my best bet.

It’s as though everything that could have gone wrong with these tarts did. Welcome to delicate fussy foods, clearly it pays to have a food stylist.

How did your Pinterest Photo Project fare? We’d love to hear all about it! Post links to your blog, Flickr, or wherever you’ve posted your images publicly online for us all to take a peek at. It would be great if you could link back to us and to the original image on Pinterest that inspired you. I’m soooo excited to see what you’ve been up to!